Your first idea is rarely your best. Don't be afraid to nuke your first idea and run with your second--or third, forth or fifth.

Posted by Kelly Shipp at 6:10 AM No comments:

Focus on your work and personal progress...


Fortunes are built during the down market and collected in the up market. Now's the time to build, so turn off CNBC and forget the Dow. It's meaningless to you now. All that matters is your work and your personal progress.

Posted by Kelly Shipp at 8:48 AM No comments:


To be content with what one has is the greatest and truest of riches. - Cicero


"I never blame myself when I'm not hitting. I just blame the bat, and if it keeps up, I change bats. After all, if I know it isn't my fault that I'm not hitting, how can I get mad at myself?" -- Yogi Berra.

Posted by Kelly Shipp at 9:03 AM No comments:


"It is our attitude at the beginning of a difficult task which, more than anything else, will affect it's successful outcome." - William James


For beautiful eyes, look for the good in others; for beautiful lips, speak only words of kindness; and for poise, walk with the knowledge that you are never alone. ~ Audrey Hepburn (1929-1993)


Opportunity is missed by most people because it is
dressed in overalls and looks like work.

Posted by Kelly Shipp at 8:10 AM No comments:


Happiness is the only thing you can give without having.


Laughing 100 times burns the equivalent of 15 minutes on an exercise bike. Laugh! It's good for you.


No one has ever been sorry they got it in writing.


Here's a good list of common beliefs and assumptions that businesses make and what we can learn from them. 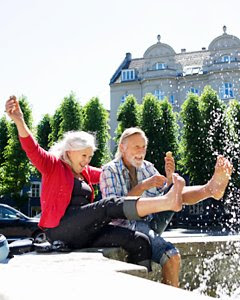 Where in the world do people feel most content with their lives?

According to a new report released by the Organization for Economic Co-Operation and Development, a Paris-based group of 30 countries with democratic governments that provides economic and social statistics and data, happiness levels are highest in northern European countries.

In Depth: See All 10 of the World's Happiest Places

Denmark, Finland and the Netherlands rated at the top of the list, ranking first, second and third, respectively. Outside Europe, New Zealand and Canada landed at Nos. 8 and 6, respectively. The United States did not crack the top 10. Switzerland placed seventh and Belgium placed tenth.

Posted by Kelly Shipp at 9:20 AM No comments:


If you're not failing every now and again, it's a sign you're not doing anything very innovative.

Posted by Kelly Shipp at 6:30 AM No comments:

Posted by Kelly Shipp at 7:37 AM No comments:


Artists make us see the world that is always there, but which we were unaware of until they open our eyes.


Social media is about dialogue, not broadcasting.